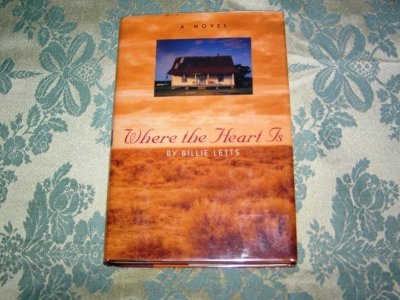 I first saw the movie “Where The Heart Is” staring Natalie Portman and loved it so much I had to get my hands on the book by Billie Letts. It is originally a book that later became a movie, but I enjoyed both media of this story. It’s a powerful, captivating and inspiring fictional story about Novalee Nation. I think you should read “Where The Heart Is” and share it with all your friends.

“Where The Heart Is” by Billie Letts tells the story of Novalee Nation, a pregnant country girl who rises to fame as the woman who gave birth in a Walmart. The story follows her as she establishes a new life without the involvement of the baby-daddy but of close friends that teach Novalee what home really means. The sense of security that she finds inspires me that no matter where you come from in life, you can define what you call home.

Novalee and Forney are meant to be together. The story has the touch of romance as Novalee learns the difference between Willy, the loser boyfriend who abandoned her at the Walmart after knocking her up, and Forney, an honest man who cares for his mentally-ill sister and the well-being of his friends. Will these two end up together? What about Novalee’s friend Lexie who always seems to end up with the wrong men? Will she find true love?

One thing I admire about Novalee is that she makes something with what she’s given. Sister Husband confuses her with an old acquaintance which opens up the possibility of Novalee taking her daughter to a more respectable living arrangement than staying at the local Walmart. I admire Novalee’s strength as she takes what comes her way and tries to manage it as best as she can. It reminds me of the adage, “Bloom where you’re planted.”

Forney’s dreams to go to college get thwarted when his sister gets ill, leaving him to tend to her daily. As I read “Where The Heart Is,” I felt bad that Forney had to give up his dream but I began to wonder how our dreams form given our circumstances. When I look at how Novalee took charge of her life and starts to pursue photography, I see the hope that though a dream may die, another can come to life.

I find Novalee’s ongoing struggle with the number five very unique. I think it’s interesting to see how the author turned this phobia into plot points throughout the story. For example, Novalee knows her boyfriend abandoned her at a Walmart when her change comes to $5.55. Talk about your gut feeling.

The friendship that forms between Lexie and Novalee inspires me. When I see them together, I get comforted by the thought of having a friend in life who will look out for me and always be a person to turn to in my time of need. Lexie has been in her rut with the wrong men over and over again. Each of her kids have a different father who skipped away as soon as the strip turned pink. Yet Novalee is there encouraging her to try again because one day she will find someone who will take care of her and her children better than she could have imagined. A friend that believes that for me is worth keeping.

7. Where the Heart is

In the beginning, Novalee takes ex-boyfriend Willie Jack’s hand and puts it on her stomach, exclaiming, “Can you feel that....that bomp, bomp bomp? That’s where the heart is.” Even though he skips town and leaves Novalee to care for their baby on her own, he’s haunted by that statement. It’s where the heart is. I did like how Letts’ uses that statement as a way to make Willie Jack regret what he did. It’s clever!

“Where The Heart Is” by Billie Letts is a fantastic read that makes you laugh and cry while feeling right at home in the upside world of Novalee Nation. What is your favorite part of the book? Who is your favorite character?